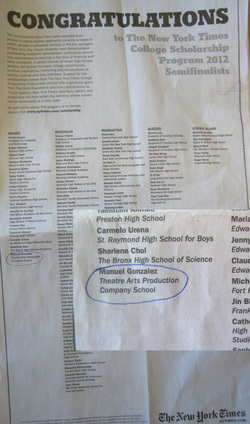 We are very proud of Manuel and his accomplishments.  He has been a model student, availed himself of college readiness opportunities, like COLLEGE NOW.  He is also been involved in our award winning video program and is an accomplished artist.

The Higher Education Opportunity Act of 2008 (HR 4137), which passed the House and Senate on July 31, 2008 includes a requirement for the US Department of Education to develop a model institution financial aid offer form. The text of the legislation is as follows:

This article originally appeared on FinAid.org.

After you submit your application for financial aid, you will receive a financial aid award letter from the college(s) to which you applied, typically in early to mid-April. This letter spells out the details of your financial aid package.

A financial aid package is a collection of different types of financial aid from multiple sources. It is intended to help you fill the gap between your ability to pay (your expected family contribution or EFC) and college costs (the cost of attendance or COA). It is based on your financial need, the difference between COA and EFC.

After you receive the award letter, you may be asked to return a signed copy of the letter in which you accept or reject each source of financial aid. The college will not increase other aid to compensate if you reject part of the financial aid package, such as loans. (FinAid recommends accepting the Perkins and Subsidized Stafford Loans, as these are very low cost loans based on financial need. The government pays the interest on both loans while the student is enrolled in college at on an least half-time basis.)

There is no standard format for award letters, making them difficult to interpret and to compare and contrast. Some common problems include:

The first thing to do when you receive an award letter is to identify the major cost components at the school and the major components of the financial aid package. The cost figures should include tuition and fees, room and board, books and supplies, transportation and personal expenses. The financial aid package should include grants, work-study, and need-based loans. There may also be non-need-based loans. Total each category separately, so that you can compare the award letters from different colleges on an apples-to-apples basis.

Some educators suggest calculating the percentage gift aid (grants and work-study) in the financial aid package. FinAid does not agree with this advice, as such percentages are at best an imprecise gauge of the factors that matter most to the family, namely how much the college is going to cost. For example, one college may offer a greater percentage grants, but still cost the family more because the total cost of attendance is greater.

FinAid recommends looking at two figures that provide meaningful information about the cost of the college: net cost and out-of-pocket cost:


Resources for Students and Parents

Whether you are in college or a prospective student, not all majors earn you the same salary. Of course, you should never choose a major just for the money. If you don’t enjoy the work, then all that money will never equal the dissatisfaction you have for your job.

Luckily, there are many majors in numerous fields of studies to choose from that will pay high starting salaries to recent graduates. According to the National Association of Colleges and Employers (NACE), here are the 10 top paying degrees and their starting salaries (as of 2008):

The Importance of the High School Junior Year

Follow this link to read an article by by Randall S. Hansen, Ph.D. about the importance of Junior Year.  http://www.quintcareers.com/high-school_junior_year.html.

If you’re still looking for some cash for school, the financial aid office may have some extra lying around. Known as the “summer melt,” schools may have a surplus of financial aid dollars from students deciding not to attend at the last minute.

If you’re in need of some more cash, call the financial aid office and ask if there is money available and tell them about your new financial circumstances. You’ll never know if you can get more aid if you don’t try!

Did you also know that you can use your tuition to get money back on your taxes? With the Hope and Lifetime Learning tax credits, you can receive up to a $2,000 tax credit from your tuition costs every year. By taking advantage of these hidden and little-known programs, you’ll be saving thousands of dollars each year!

Start your search now for schools and degree programs, knowing college is more affordable than ever!

Test day is almost here, but there’s still time to study. Whether you’re well-prepared, semi-prepared or not at all prepared, we have several last-minute prep strategies that can help you boost your score.

Your Preparedness Level: “SAT? What SAT?”

Obviously, there’s no time to take a prep course. But don’t give up – you can still maximize your chances of a decent score.

Your Preparedness Level: Studied a Bit, but Could Use More Help

Your Preparedness Level: Been Studying Hard

Here’s how to keep up your study momentum as the big day approaches:


The Morning of the Test:

In general, with the student not working and in a home with mom and dad both working, what is the maximum income they can earn and still qualify for financial aid? — Tracee N.

Federal student aid is awarded based on the student and parent income and assets, household size, number of children in college and a variety of other factors. It does not, however, have any explicit cutoffs on need-based aid eligibility.

But even if you don’t qualify for a Pell Grant it is still worthwhile to submit the FAFSA. The unsubsidized Stafford loan and the PLUS loan are available without regard to financial need. You can be extremely wealthy and still qualify for these loans. The Hope Scholarship tax credit is available to families with income up to $90,000 (single filers) and $180,000 (married filing joint).

Note that student employment can have a big impact on aid eligibility, especially for independent students. A portion of student income is sheltered from the financial aid formula, but as much as half of income above this income protection allowance will be counted as part of the EFC.

For additional information on this topic see Targeting of Student Aid Programs According to Financial Need.

My parents don’t have a Social Security Number. Is it possible for me to submit the Free Application for Federal Student Aid (FAFSA) and qualify for federal student aid? — Michelle G.

If your parents are not US citizens or permanent residents, they will be unable to borrow from the PLUS loan program. In that case you will be eligible for increased unsubsidized Stafford loan limits, the same limits that are available to independent students.

Guide to Financing a College Education

Tuition is the cost to attend and receive credit for college courses. College and help websites offer resources to help compare and prepare for tuition costs. If there is a particular school of interest, it is best to visit their individual website for up to date information. Whether planning to attend a community, private, or state college or university, information is available to guide students through the tuition process. By seeking out information and opportunities, it is sometimes possible for students from low to middle income families to receive reduced or free tuition to attend college.

Many families choose to reduce room and board costs by having the student continue to live at home. This option is available for those who choose a college close to home. Students who plan to go away to school must consider living expenses in order to estimate the true cost of going to college. Living options for students usually include a dormitory, on campus apartment, or off campus renting. Meal plans are often a choice for students living on campus. Students without a full meal plan need to be prepared to buy their own groceries or pay to eat out.

On top of tuition and room and board, there are many additional college costs. Examples of additional fees include transportation and parking fees, the cost of textbooks, computer and paper supplies, and student health insurance. These items are often overlooked and written off as something that can be taken care of as needed. But these extra costs can add up quickly, so it's best to plan ahead and to include all expenses.

A general rule for saving is to set funds aside before you have spent them all. Every little bit saved ahead of time can add up to a tangible amount with enough time. College is more affordable when parents start saving when their child is still young. While that is not always possible, the sooner parents or students themselves start saving, the better.

Financial aid is often offered by the government as an investment towards the future. Take advantage of what is available through financial aid by researching early to find out what works best for you and your situation. With financial assistance, many find their college savings are able to go much further.

College grants are offered by the government to help pay for tuition. Grants are not loans, because they never have to be paid back. There are more than a thousand grants available through twenty-six federal agencies, as well as some state-funded grants. The most popular federal grant is the Pell Grant, which is usually awarded to undergraduates enrolled into a degree program. Grants offer different amounts and have different eligibility requirements, and they are well worth looking into to see if you qualify.

Student loans often come through financial institutions or the government. Sometimes they come through financial institutions to the student, but are provided by the government. For this reason, it is sometimes best to start with the government loans and consider options from there. Loans can be used to help fund either part or all of a student's education, including room and board and additional fees. Unlike grants, student loans must be repaid in full and usually with interest.

A scholarship is different than a loan in that it is given to a student based upon their merit. Scholarships are often provided for athletics, music, and academics. They are usually given by the college, companies, or groups as a gift that the student receives for achievement or good grades. Scholarships may also be awarded as a prize or based on ethnicity. Finding a scholarship can be a challenge, but there are many available. It takes some research to find one that a student can qualify and apply for.

The work-study program is a federal program that allows students to work part time in order to defray their educational costs. Students must meet eligibility requirements in order to qualify. Only a select number of students are chosen to receive work-study in any given school. A student must complete a federal financial aid application and any additional forms for each college applied for.

With all of the costs associated with college, it is often necessary for a student to hold a part time job. Finding a job may be challenging, as many other student are also looking for employment. When searching for a job, keep in mind what you need to be paid and what hours you can reasonably work within your school schedule. Ask friends if there are openings where they work, search job boards, and read ads in the daily paper. Campus jobs and local businesses often post positions for college students on campus. It's always best to be prepared before an interview and keep a professional looking resume ready at all times. Those who stay on top of the job market and act quickly are the people who get the positions.