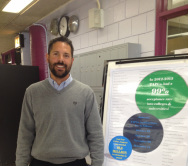 James graduated from the State University of New York at Albany with a BA in criminal justice and sociology in 1997 and an MA in criminal justice in 1998.  Admitted to Albany under the Talented Student Athlete Program (TSAP), he became the captain of the Division I-AA football team and was voted one of the team's most valuable players as a senior. As a graduate student, James coached one season of women's basketball under legendary coach Mari Warner.  After graduating from Albany in 1998,  he moved to Miami, Florida.

In Florida,  James began working with homeless and runaway teenagers at Covenant House Fort Lauderdale.  As a Community Services Specialist, James was responsible for managing a community center that housed a pantry, a soup kitchen, a housing program, an employment assistance program, and a community school.

After eight years in Florida, James and his wife decided to move back to New York to begin raising a family.  He immediately began his first of five years as the Director of College Guidance at Saint Agnes Boys High School on West 87th Street in Manhattan.  While at Saint Agnes, James received his Education Specialist degree (Ed.S) and New York State Certification in School Counseling.

After five wonderful years at Saint Agnes Boys High School, James returned to his Bronx roots to work as a college counselor through Community of Unity at TAPCo (Theatre Arts Production Company School).  He held the position of Director of College and Career Development for these organizations for 5 years. After TAPCo, he worked at Saint Joseph High School in Brooklyn for three years before it permanently closed.  He is now working full time for the company he founded, Admissions and Aid Consulting.