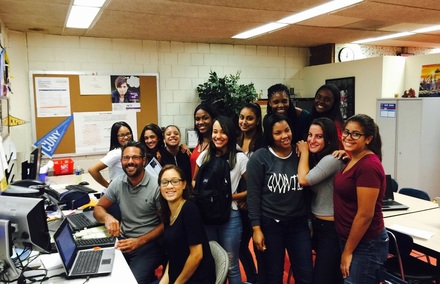 ‘They don’t realize how special they are’: How one guidance counselor defines college readiness

Originally posted on Chalkbeat by Monica Disare on July 15, 2016

James Giordano, a college counselor at a high school in the Bronx, has a secret for making all of his students college-ready: He creates a personalized definition for each of them.

Instead of relying on the city and state definitions, Giordano pores over data sets of students’ standardized test scores and grades, creating large, colored spreadsheets that show patterns of success. He learns their life stories and finds out what motivates them to come to school.

Low-income students do not struggle to attend college because they miss a benchmark set by CUNY based on Regents exam success, Giordano said. It’s that they are burdened by a complex system that fails to recognize their strengths.

As the director of the Design Your Future Program at TAPCo, a high school focused on performing and visual arts in the Bronx where all students live in poverty, Giordano helps draw out students’ achievements and navigate the tricky process. His role — which helped propel almost all of the school’s 64 graduates to college this fall — does not exist at most schools, where college guidance comes from counselors with a wide range of responsibilities.

We sat down with Giordano to learn about his job, some of the students he has helped navigate roadblocks, and why he thinks spreading his school’s model could be an uphill battle. (The interview has been condensed and lightly edited.)

What is your secret to helping graduates go to college?

Giordano: I start off with the assumption that every student is extraordinary in some way or another. If you were to look at my students, if I were to give you a bunch of transcripts, you would think you have some average kids here, you have some kids that are above the fray, but most of them are below average GPA and SAT scores. So what I do is collect an enormous amount of data beginning in the sophomore year. I make a picture of all their academics and I try to see if there are students that stand out academically from the crowd. That could be Regents scores, PSAT scores, that could be a GPA, that could be a student that does really well in math or history.

As they get older and they progress, then I really start to putting the picture together on the other side. It’s who the students are. They’re graduating at a higher rates [than peers at other schools], they are going to college at a higher rate, so I try to figure out what about the kids is keeping them in school and keeping them going. I start to working with them on their college essays in their junior year and that’s when I figure out what their story is really about.

What do you think about formal definitions of college-readiness? These definitions are increasingly used to track progress on city initiatives and communicate to students whether they are likely to succeed in their first year.

This girl in NYU’s nursing program, on paper her SAT scores were so far below what they’re looking for and she is finishing up her first year at the top of her class. How can you say these metrics are completely accurate? How well you do on a Regents exam and how well you do on an SAT, all of those things, yes, they do have an impact on how well a kid will do. But you have to look in between the lines.

You can’t put these kids into a bottle, they’re so different. Every one of them is so unique, to say that those criteria that CUNY sets forth, and the state sets forth, it’s so blind. It’s not looking at the kids as individuals. It’s just looking at the kids as a big gigantic group that’s all the same. So that’s the secret sauce. It’s is breaking all that stuff down and figuring out who these kids are on a much, much deeper level.

How do students fare when they get to college?

It’s hard for them because they are behind academically. Their first semester is always really hard and I warn them. It was hard for me too. I almost went home. I tell them just get through that first semester, or that first year, and you’ll see it turn around around.

But they’ll make it. I know they will because I see in them the potential that they have. It’s just an amazing thing to watch when you have these kids who, on paper, should never succeed at the University of Rochester and they get there and they just skyrocket and blossom. It should be enough to keep the critics quiet, but unfortunately it’s not.

How do you help with the process?

Sometimes I know the rules better than the schools themselves. A lot of the schools, they want a certain type of student and they don’t want another type of student. I’ll give you a quick story. I had a student who was conditionally accepted to the SEEK [a program for four-year CUNY schools that supports financially disadvantaged students] program at John Jay. She took the CUNY assessment and failed, so they sent her a letter that said she was not going to be able to go there. The truth of the matter is the rules are different. There’s a way for her to go there with SEEK and still be able to attend and graduate on time. So I wrote a letter. I called the school, and she got accepted.

Doing that with one kid is one thing. Doing that with 60 kids is another. So it just becomes a matter of knowing the rules like the back of your hand and really being willing to fight for these kids, because they really need someone to fight for them. It’s really a mountain they have to climb and doing it alone is devastating. I know the rules and I know how to maneuver the system.

What other obstacles do students face?

I’ll give you an example. Let’s say for the EOP program [a program that helps economically disadvantaged students at SUNY schools]. If somebody had a tax return, had income and they fall just under the income requirement, all they have to do is provide proof of that. Say they don’t have any income. That’s actually harder to prove.

I push them through the entire process. We’re talking copies and faxing and do you know what a budget letter is? Some schools will take a copy of that and some schools won’t. The students and parents have to go into social services and get proof for all of this stuff. They are often times told by the people working there, ‘sorry we don’t do that.’ It’s a really long process and I’m doing that with the students and not with the parents. Parents, they’re so confused by all of this, that they’re not involved too much. It’s mostly the students and it’s really a lot of stress for them.

What about the cost of college?

It gets very complicated because the parents, for the most part, are first generation who have not graduated from college. They’re coming from a whole different place, and the information they’re getting is different than the information that I’m giving to students. But the students know from their junior year that if they want to go away to school, it’s going to cost them money. I want them to know if they want to go to SUNY they have to take out a $5,500 loan [each year]. For some of them, it’s difficult to come to terms with it. Some of their families don’t make that in an entire year.

The parents when they see $5,500, for the most part they discourage their children from going that route because you can go to CUNY for free. For them it’s just about dollars. Don’t go anywhere that’s going to cost you any money. I have to teach them when that’s OK and when it’s not OK.

Do you talk to students about race and culture at college?

But they’ve been there before and they rise through it. For the most part they end up loving it. They end up meeting people they would have never met. For the white people in college, they have never been exposed to any diversity as well. So these two meeting, they’re changing each other and they’re changing the school in the process

Do you think there’s a way to spread this model? What about the Single Shepherd program, a de Blasio initiative that will give counselors to students in two high-needs districts?

We have an amazing guidance counselor at our school. At a normal school, he would also be expected to do what I do, which is a joke.

I think [Single Shepherd] is a start. The problem with a lot of those programs is they’re young counselors going in there. You kind of need war-torn counselors, and those guys tend to understand it on the surface. You could train these counselors all you want, you don’t learn it until you’re in it. A lot of people hate it, they hate doing what I do because it’s so complex. I don’t know if there’s an answer to how do you get people to stick with it and to focus on it. You have a lot of people like me who work in suburbs, but I don’t think you have a lot people like me who are where I am. 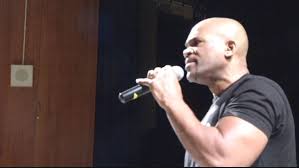 ​TREMONT, The Bronx —  The 64 graduates of the Theater Arts Production High School class of 2016 have so much to be proud of.  This 8-year-old New York City public high school in the Tremont section of the Bronx is in a neighborhood where the graduation rate is 60 percent. Yet Tapco, as it is called, has a 77 percent graduation rate with all of this year's graduates going on to college.

James Giordano was interviewed by the Associated Press as an expert on the use of social media in education and featured in several articles.